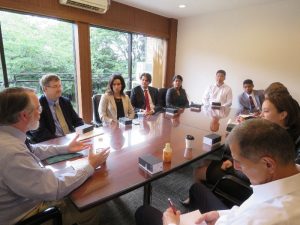 MFP 24 Fellows meet with Mansfield Foundation Vice President Ben Self (far left) in Tokyo as they prepare for ten months of placements within the Japanese government.

This week marked the first week back in Tokyo for the twenty-fourth class of Mansfield Fellows. The ten federal employees in this year’s class met with the Ministry of Foreign Affairs, introduced themselves to their host agencies, and received an orientation from Mansfield Foundation staff ahead of their first round of placements within the Japanese government next month.

The Fellows recently completed a seven-week intensive language study program in Ishikawa Prefecture, which included homestays with families in the area. In September, they beginning the second portion of their Fellowship, which includes ten months of placements with Japanese government offices and other entities. In addition to their enhanced language abilities, these placements will allow each Fellow to bring detailed knowledge, understanding, and relationships back to their home agencies upon their return to the United States.

Learn more about the Fellowship Program and this year’s class in our latest brochure! 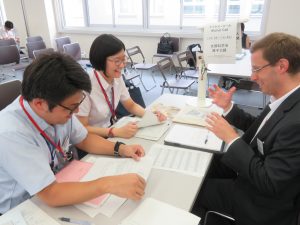 Mansfield Fellow Michel Call (Nuclear Regulatory Commission) meets with representatives from one of his host agencies in Japan.