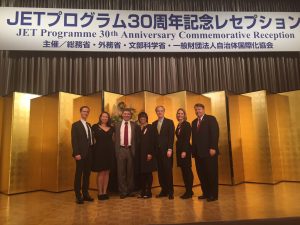 Earlier this month alumni Fellow Keith Krulak traveled to Japan to attend a ceremony commemorating the 30th anniversary of the Japan Exchange and Teaching Programme (JET).  Mr. Krulak, who participated in the Mike Mansfield Fellowship Program as a representative of the U.S. Department of the Treasury from 2001-2003, serves as Treasurer of the United States Japan Exchange & Teaching Programme Alumni Association (USJETAA), a  nonprofit organization that promotes grassroots friendship and understanding between the U.S. and Japan through the experiences of Americans who have participated on the JET Programme.  In addition to participating in the November 7 30th anniversary ceremony in Tokyo, Mr. Krulak traveled to Okayama, where he taught English as a JET Programme participant from 1993-95.