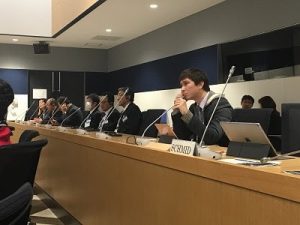 This fall alumni Mansfield Fellow Howard Stone (U.S. Justice Department) spent several weeks in Japan meeting with colleagues from Japanese government and other organizations where he was placed during his 2014-2015 Mansfield Fellowship.  Mr. Stone met with Japanese Diet member Shinjiro Koizumi as well as with former colleagues and contacts in the National Police Agency, the Pharmaceutical Medical Devices Agency, the Ministry of Justice, security company SECOM, and officials from the Saga Prefectural government and police.  He also met with former Japanese Ambassador to the U.S. Ichiro Fujisaki, and separately with students from Sophia University.   As part of his placement with the Ministry of Justice in late 2014, Mr. Stone participated in an international training course for personnel working in criminal justice administration at the United Nations Asia and Far East Institute for the Prevention of Crime and the Treatment of Offenders (UNAFEI).  During his recent trip he was invited back to UNAFEI to briefly participate in the 20th UNAFEI UNCAC (United Nations Convention Against Corruption) Training Program, which is pictured above.