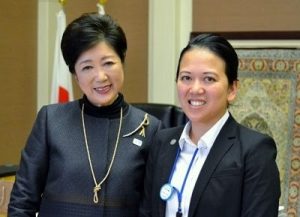 MFP No. 21 Fellow Meyliana Tongko (United States Air Force) this week will complete a placement with the Tokyo Metropolitan Government (TMG). The first day of her placement she met with Tokyo Governor Yuriko Koike (pictured above with Captain Tongko) and several TMG executives.  Over the next few weeks of her placement she participated in study trips to learn how a wide range of local government units — including Tokyo Metro, Tokyo Fire Department, the Bureau of Waterworks, and the Bureau of Construction — work to prevent and plan for disasters.

Last week Captain Tongko got a closer look at how the city prepares for crises by participating in a TMG disaster management exercise in Shinjuku ward.  The purpose of the exercise was to simulate an emergency response and the coordination of temporary evacuation for commuters during a disaster. According to TMG estimates, in the event of a major earthquake, nearly 5.17 million people in Tokyo will have difficulty going home. For this exercise, around fifty TMG staff members provided emergency instructions to direct approximately 150 volunteers posing as stranded commuters towards evacuation centers and shelters.

Captain Tongko’s objective for her year in Japan is to develop an in-depth understanding of the Japanese government’s efforts in disaster relief management.  Her next placement will be with the Water and Disaster Management Bureau of Japan’s Ministry of Land, Infrastructure, Transport and Tourism.