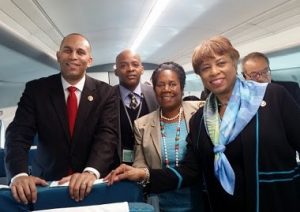 MFP No. 20 Fellow Darrell Rico Doss helped welcome a Congressional Black Caucus (CBC) delegation to Japan last month, providing the members of Congress and their staff with a brief “Introduction to Japan” upon their arrival.  Among other issues, Mr. Doss addressed the Trans-Pacific Partnership, Japan-China-ROK relations, the Japanese economy, the history of Mike Mansfield, and the importance of the U.S.-Japan relationship.  Prior to beginning the Fellowship Program last year, Mr. Doss served as Economic Policy Counsel in the office of Congresswoman Sheila Jackson Lee, who chaired the CBC delegation.  Among other key meetings, the delegation was received by Chief Cabinet Secretary Yoshihide Suga.  Mr. Doss is pictured above with Congresswoman Jackson Lee and the other members of the delegation – Representative Brenda Lawrence and Representative Hakeem Jeffries – on a test ride on the Superconducting Maglev railway system, a prototype of which is currently being studied in Maryland.

Also last month, Mr. Doss concluded his placement in the office of Takaaki Katsumata, a Liberal Democratic Party (LDP) member of Japan’s House of Representatives.  During that placement he observed policy discussions at the LDP headquarters and participated in door-to-door canvassing, meetings with local government officials, and visits to manufacturing and other sites in Representative Katsumata’s district.