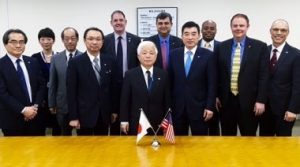 Last week incoming MFP No. 21 Fellow Michael Fletcher (NASA) and colleagues from NASA traveled to Tokyo for meetings with representatives of the Japan Aerospace Exploration Agency (JAXA) and others interested in NASA’s aeronautics research and management activities. The trip gave Mr. Fletcher an opportunity to visit some of the Japanese offices he will be working in during his Fellowship year in Japan.

The group visited Chofu Aerospace Center for NASA-JAXA bilateral discussions, a tour of the transonic wind tunnel, and technical presentations from JAXA researchers. Later in the week, they met JAXA President Naoki Okumura (pictured above with the group) and officials at Japan’s Ministry of Education, Culture, Sports, Science & Technology (MEXT).   Both Chofu Aerospace Center and MEXT will be among Mr. Fletcher’s placements during his Fellowship year.  Mr. Fletcher and his colleagues also toured Tokai University’s aero sciences programs, updated U.S. embassy staff on NASA’s aeronautics work, and met with representatives of the American Chamber of Commerce in Japan.