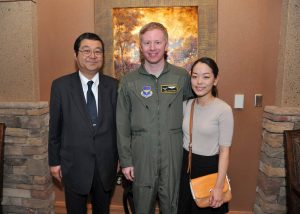 Mansfield Fellow Luke Deckard (United States Air Force) participated in a March 30 event hosted by the Consul-General of Japan (Denver) and Team Kirtland at Kirtland Air Force Base in New Mexico. The joint lunch reception was intended to strengthen ties and build dialogue between the Japanese Consulate-General and U.S. military officers, enlisted members, civil servants, and their families. Major Deckard gave a brief presentation at the March 30 event on his travels in Japan and his participation in Operation Tomodachi. Major Deckard, an MC-130J Navigator, flew some of the first missions during Operation Tomodachi, the joint U.S.-Japan relief operation following the 2011 Great East Japan Earthquake and tsunami. Major Deckard is a member of the twenty-second class of Mansfield Fellows and will begin his Fellowship year in Japan in July. He is pictured above with his wife Ayumi Deckard and Consul-General Hiroto Hirakoba.