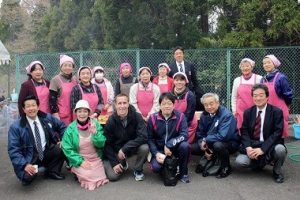 MFP No. 20 Fellow Daniel Benson (United States Marine Corps) has spent the last few weeks working in the office of Itsunori Onodera, a member of Japan’s House of Representatives and former Minister of Defense.  Last week he had an opportunity to join Representative Onodera in a visit to his district in Miyagi Prefecture, parts of which were devastated by the tsunami that followed the Great East Japan Earthquake in 2011.  Representative Onodera’s relationship with the Marine Corps extends back to March 2011 when Marines from Okinawa arrived in his district to provide relief supplies, clear debris, and ensure basic services were restored in the hardest hit areas.  This was especially true on Oshima Island, and on this recent trip, Major Benson was able to see how the island was managing its recovery as he completed a half marathon alongside Representative Onodera.  Major Benson and Representative Onodera are pictured below with local politicians and volunteers from Oshima Island prior to the half marathon. Major Benson noted that reconstruction efforts in Minamisanriku, Kessenuma, and Oshima Island have made a huge amount of progress, but work remains to be done.  He described the scale of ongoing development projects as “staggering.”