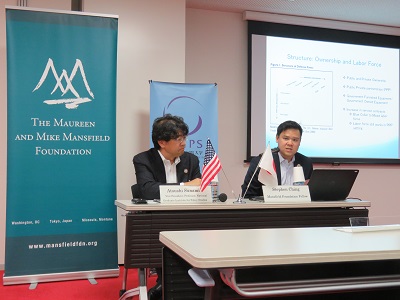 In the final weeks of their Fellowship year, two members of the 22nd class of Mansfield Fellows had opportunities to share their skills and expertise with broad audiences. On May 16, Mansfield Fellow Stephen Ching presented an overview of “The U.S. Defense Industrial Base: Continued Importance, Current Challenges, and Potential Implications for Japan” to an audience of more than fifty business leaders, government officials, policy experts and scholars at the National Graduate Institute for Policy Studies (GRIPS) in Tokyo. Mr. Ching, a Contracting Officer in the U.S. Department of State’s Bureau of Administration, outlined the roots, structure, and viability of the defense industrial base. Members of the audience – including Diet members Tatsuo Fukuda and Keitaro Ohno, both of whom currently serve as Parliamentary Vice-Ministers of Defense – followed up with questions for Mr. Ching. The Foundation and GRIPS cohosted the seminar, which was moderated by GRIPS Vice President and professor Atsushi Sunami.

As part of her placement at the Ministry of Foreign Affairs Protocol Office, Mansfield Fellow Patricia Sloss (U.S. Department of Defense) played an important role at the May 24 Satsuki Azalea Festival hosted by the Japan Satsuki Association. Ms. Sloss interpreted for His Excellency Yohei Kono — former Speaker of the House of Representatives, father of Minister of Defense Taro Kono, and Honorary Chairman of the Japan Satsuki Association — as well as the association’s chairman, Kazuo Kunimi (both pictured with Ms. Sloss below). The event at Ueno Park was attended by over sixty ambassadors and delegations representing forty-four different countries. 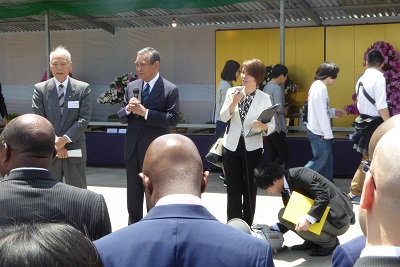