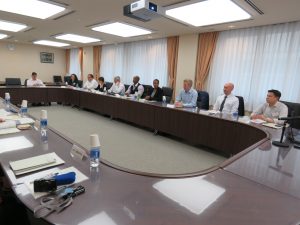 Members of the twenty-second group of Mansfield Fellows concluded their Fellowship year in Japan with a June 25 debriefing and farewell event at the National Personnel Authority (NPA).  Each Fellow made a ten-minute presentation in Japanese about their Fellowship year and answered questions from officials from NPA, which plays a critical role in securing the Fellows’ placements in Japanese government agencies and ministries.  NPA presented the Mansfield Fellows with certificates and hosted a reception for the Fellows and their families, language teachers, and colleagues from the agencies that hosted their placements during the year.

Mansfield Fellows are required to return to federal service for at least two years after their Fellowship year.  Rodger Welding (United States Air Force) is among the members of the twenty-second group assigned to new U.S. government positions working with Japan.  Major Welding will serve as Japan Country Director at Headquarters Pacific Air Forces in Honolulu, a position previously held by MFP No. 20 John Wright.