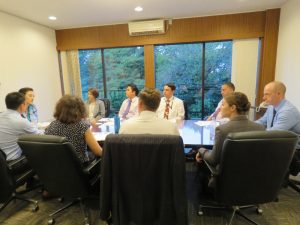 On October 9, the nine members of the current class of the Mansfield Fellowship Program met with Dr. Mieko Nakabayashi, a professor at Waseda University and a Mansfield Foundation Distinguished Fellow. The discussion, entitled “Japanese Policy-making and Politics: Differences between the U.S. & Japan,” covered the origins and state of Japan’s political system and how it differs from American politics. Dr. Nakabayashi also discussed key issues facing Japan, including demographic and economic concerns.

Dr. Nakabayashi, drawing from her experience in Japan’s House of Representatives, also gave the Fellows advice on making the most of placements in the offices of members of Japan’s National Diet.