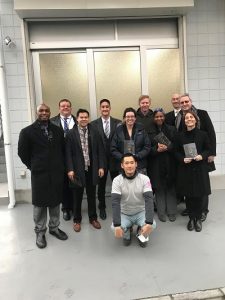 Last week the Mansfield Fellows in Japan spent a day in Sumida-city in northeastern Tokyo learning how the municipal government is promoting industrial tourism and visiting two of the ward’s small and medium-sized enterprises.  After a briefing on Sumida-city’s industrial tourism strategy, the Fellows visited two companies that manufacture metal molds and parts — Yoshizumi Press, which specializes in electrical, stationary, and automotive parts, and Higashinihonkinzoku (shown below), which specializes in household products.  The study tour was organized by the National Personnel Authority and is one of several trips designed to broaden the Fellows’ knowledge of Japan’s government, politics, and economy during their year in Japan.