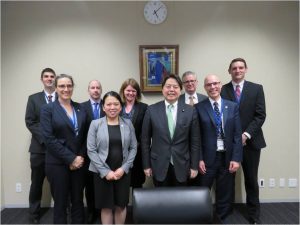 Last week the twenty-first group of Mansfield Fellows had an opportunity to meet with House of Councillors Member Yoshimasa Hayashi, a senior Liberal Democratic Party politician with extensive experience in trade and economic policy.  Councillor Hayashi has served in the House of Councillors since 1995, but before he entered politics in Japan he played an important role in the establishment of the Mike Mansfield Fellowship Program.  In the early 1990s he helped write the legislation that created the Fellowship Program while serving as a Congressional Fellow in the office of the late U.S. Senator William Roth.  In recent years he has met regularly with the Mansfield Fellows in Japan and numerous Mansfield Fellows have had placements in his office.  During the April 4 meeting Councillor Hayashi briefed the Fellows on Japan’s economic policy and the Fellows shared observations gained from their recent placements in Japanese government agencies.