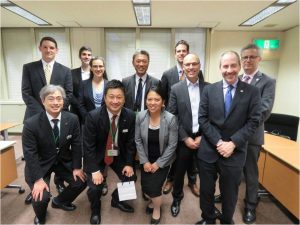 For the last ten years Central Japan Railway Company (JR Central) has invited the Mansfield Fellows in Japan to tour the Tokaido-Sanyo Shinkansen General Control Center, the “brain” behind one of the world’s busiest high-speed rail lines.  The General Control Center is responsible for maintaining the reliability and safety of the Tokaido Shinkansen, which links Tokyo, Nagoya, and Osaka and has played a critical role in Japan’s economic development.   On April 18, members of the twenty-first group of Mansfield Fellows saw the General Control Center in operation.  JR Central staff (shown above with the Mansfield Fellows) provided a briefing and answered the Fellows’ questions about issues including JR Central’s experimental maglev line, operations during earthquakes, and security management.