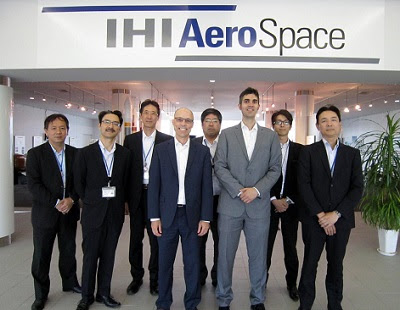 In the final weeks of their Fellowship year, two members of the 21st class of Mansfield Fellows received an inside look at one of the companies leading Japan’s growing aerospace industry — IHI Corporation. Last month Michael Fletcher (National Aeronautics and Space Administration) and Sean Wilson visited facilities supporting IHI’s production of jet engines and space equipment. The two Mansfield Fellows spent the day at the IHI Aerospace Tomioka plant in Takasaki, where they had technical and programmatic discussions with IHI staff and a tour of the manufacturing plant. Both Mr. Fletcher and Mr. Wilson have participated in placements with the Japan Aerospace Exploration Agency and other offices to further their understanding of Japan’s aerospace sector and how the U.S. and Japan can cooperate on space policy. Both Fellows also contributed to the U.S.-Japan Space Forum discussions that took place in Japan this March. IHI Aerospace is a participant and primary sponsor of the Foundation’s U.S.-Japan Space Forum.