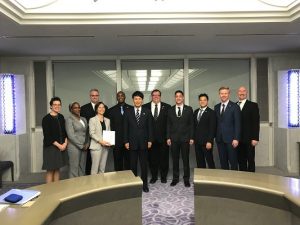 Throughout the Mansfield Fellows’ year in Japan, the National Personnel Authority (NPA) organizes study tours to deepen the Fellows’ understanding of the country’s history, culture, government, and economy. Last week, the Fellows saw how Japan prepares for and responds to natural disasters during an NPA study tour to Kagoshima and Kumamoto prefectures. In Kagoshima, the Fellows learned about the prefecture’s history and culture at stops including Sengan-en and Shoko Shuseikan, UNESCO World Cultural Heritage Sites related to Japan’s Meiji Industrial Revolution. They also met Governor Satoshi Mitazono (pictured with the Fellows above) and received a briefing on the administration of the prefecture. Please click here to read Governor Mitazono’s Facebook post about their visit.  The Fellows’ last stop in Kagoshima was the Ministry of Land, Infrastructure, Transport and Tourism’s Sakurajima International Volcanic SABO center, where they learned about efforts to control erosion and sediment in the shadow of Sakurajima, one of Japan’s most active volcanos.  In Kumamoto, the Fellows visited Kumamoto Castle, which was seriously damaged during the earthquakes that hit the prefecture in April 2016. They concluded the October 11-13 study tour with a visit to Kumamoto Governor Ikuo Kabashima (pictured below with the Fellows and Kumamoto mascot Kumamon) and a briefing on reconstruction efforts following the 2016 earthquakes. 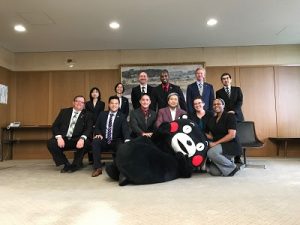