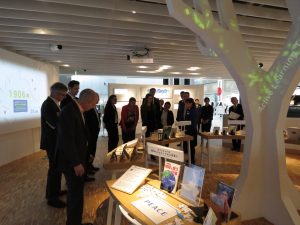 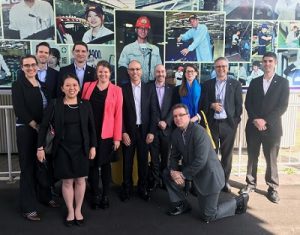 Each year the Mansfield Fellows in Japan have an opportunity to learn about the history and operations of two of Japan’s leading companies during a study tour hosted by Panasonic and Toyota.  This year the two-day tour began March 23 at Panasonic Center Tokyo.  There the Fellows were given an overview of Panasonic’s business and history and an introduction to Panasonic’s cutting edge technologies and concepts for enriching consumers’ lives in the future.  They also engaged in a Q&A session with a Panasonic executive before concluding their visit and traveling to Nagoya.  In Nagoya the Fellows toured Toyota’s Takaoka plant, where Toyota has been producing vehicles since 1966.  They also viewed new Toyota vehicles and technologies at the Toyota Kaikan Museum and visited the Toyota Commemorative Museum of Industry and Technology before returning to Tokyo.