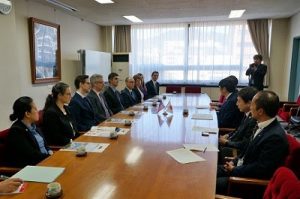 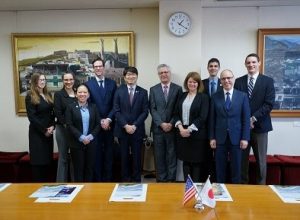 Earlier this month the twenty-first class of Mansfield Fellows participated in a study trip to Nagasaki, the ninth time Mansfield Fellows have visited this historically important city since the program was established.  The February 1-3 trip included visits to the Nagasaki Atomic Bomb Museum, Heiwa Kouen (Peace Park), and Urakami Cathedral, which was rebuilt after being destroyed by the atomic bomb in 1945.  The study trip, one of several to be organized by the National Personnel Authority (NPA) during the Mansfield Fellows’ year in Japan, was designed to provide them with a deeper understanding of Japan’s history.  The Fellows gained insights into local government priorities during a meeting with Nagasaki city Mayor Tomihisa Taue (pictured above with the Mansfield Fellows).  They also learned about Nagasaki’s current and historic infrastructure through a tour of Nagasaki Airport and a visit to Dejima, site of a 17th century island used as a Dutch trading post during Japan’s period of isolation.