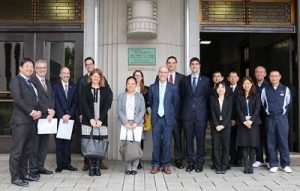 The Mansfield Fellows in Japan observed two very different types of Japanese manufacturing during a November 11 study tour organized by the National Personnel Authority.  This tour — one of several designed to broaden the Fellows’ knowledge of Japan’s government, politics, and economy during their year in Japan — focused on national and small-scale manufacturing in the Tokyo area.  The trip began with a tour of the Tokyo plant of the National Printing Bureau, which is responsible for printing Bank of Japan notes and the Official Gazette, which the Japanese government uses to communicate official notices about laws and regulations.  During the second part of the trip the Fellows visited Ota Market and met with officials from Ota City, a ward in southern Tokyo and center for small and mid-size manufacturers using advanced technologies.  The Fellows learned about measures Ota City is taking to support these industries, and visited Mimasu industries Co., Ltd., which produces components for the aerospace, nuclear fuel and high-speed train industries.