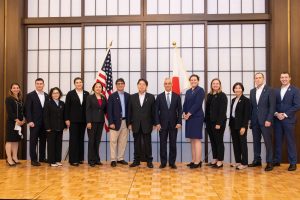 On September 1, the Maureen and Mike Mansfield Foundation, the Ministry of Foreign Affairs (MOFA), and the National Personnel Authority (NPA) held a welcome reception for the 26th class of Mansfield Fellows at Iikura House in Tokyo.

Frank Jannuzi, President and CEO of the Mansfield Foundation, expressed appreciation to both the Japanese and American governments for their support of the program, as well as Ishikawa Prefecture, which has been supporting fellows’ Japanese language study for many years. Mr. Jannuzi introduced the 10 fellows of the 26th class, each of who made self-introductions in Japanese and spoke about their determination to achieve their goals during the fellowship.