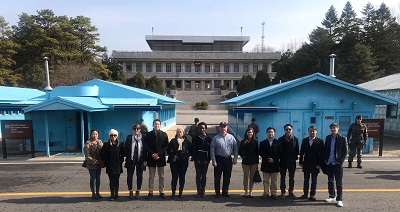 This past month alumni Mansfield Fellow Howard Stone (U.S. Department of Justice) visited the Republic of Korea with the National Bureau of Asian Research (NBR) as part of a program for emerging policy leaders in the U.S. to develop an understanding of inter-Korean issues, unification, and U.S.-ROK policy issues and to form close and continuing ties with each other and the Korean policymaking community.  While past NBR delegations to Korea focused on security issues, this was the first delegation that examined the complex issues surrounding Korean unification and post-unification scenarios – including nonproliferation, economics, justice, and human rights – while also engaging on issues that affect the alliance and regional security.

While in the ROK, Mr. Stone and other delegation members engaged in briefings with representatives from South Korean and U.S. government agencies – including the Ministry of Unification, the Institute for National Security Strategy, the Korean Institute for National Unification, the European Union Delegation to the Republic of Korea, the Blue House, UN Military Armistice High Command at the Demilitarized Zone (pictured above), the UniKorea Foundation and the U.S. Embassy.  Through his participation in the Mansfield Fellowship Program from 2014-2015 and his role at the Justice Department, Mr. Stone has worked with local law enforcement and security institutions in both the United States and Japan and has had the opportunity to examine the challenges and strengths within each system.  Based on this experience, Mr. Stone was able to provide a security and justice perspective to the delegation’s discussions.  He emphasized the critical role that having an effective and ethical security and policing system will play for integrating two peoples under strenuous security circumstances with a lack of adequate resources.