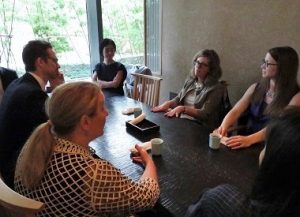 Ms. Jackson, who participated in the Mike Mansfield Fellowship Program as a representative of NASA from 1995-1997, recently returned to Japan to serve as Japan Representative at the Pharmaceutical Research and Manufacturers of America (PhRMA).  She advised the current Fellows to keep in touch with their colleagues after they finish the program.

Ms. Van den Dool, who participated in the Fellowship Program as a representative of the U.S. Agency for International Development (USAID) from 2010-2012, suggested the Fellows say yes to any opportunities provided by agencies and others during their placements in Japan.  Among the opportunities Ms. Van den Dool took advantage of during her Fellowship year was to travel to Africa with colleagues from her placement in the Africa Department of the Japan International Cooperation Agency (JICA).  She now works in South Africa as the Donor Coordination Advisor for USAID/Power Africa.  She was in Tokyo last month for consultations and meetings on the newly announced U.S.-Japan partnership on energy access in Africa.