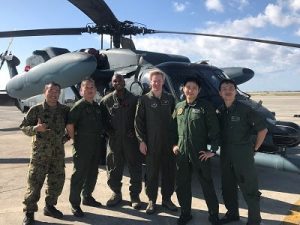 While most of the Mansfield Fellows’ placements during their year in Japan are based in Tokyo, many also provide site visits and other opportunities to learn about Japanese government and industry operations outside Tokyo. As part of their placements with the Ministry of Defense, Mansfield Fellows Ian Hurdle and Luke Deckard have visited Japan Air Self-Defense Force air bases throughout Japan. In recent months they visited Komaki Air Base in Aichi Prefecture, Naha Air Base in Okinawa Prefecture, Miho Air Base in Tottori Prefecture, and Iruma Air Base in Saitama Prefecture. Captain Hurdle is a B-1B Pilot with the United States Air Force and Major Deckard is MC-130J Navigator with the Air Force. The photo above shows them with the search and rescue squad at Naha Air Base.

Last month Mansfield Fellow Chip Taylor visited the Civil Aviation College in Miyazaki City as part of his placement with the Civil Aviation Bureau at the Ministry of Land, Infrastructure, Transport and Tourism (MLIT). The Civil Aviation College is under MLIT’s jurisdiction, and during his visit Mr. Taylor toured the school’s facilities, received a briefing on its operations, tried its basic flight simulators, and took an exam given to applicants. He also gave a lecture on “Current Trends in Commercial Aviation.” Mr. Taylor is a Principal Maintenance Inspector with the Federal Aviation Administration. 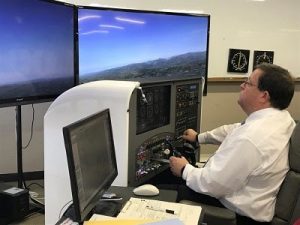 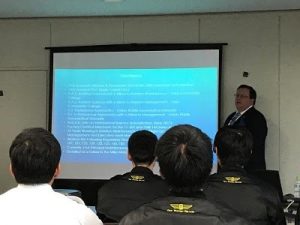