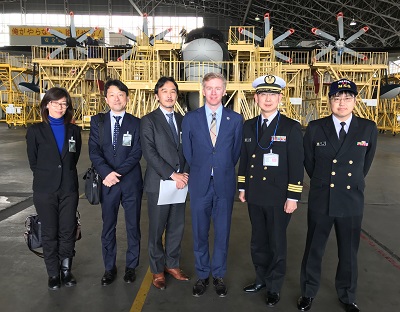 Earlier this month Mansfield Fellow Michael Luke Deckard (United States Air Force) completed a brief placement with the aircraft division of transportation equipment manufacturer ShinMaywa Industries, Ltd. in Kobe.  ShinMaywa`s aircraft division makes the US-2, a seaplane operated by the Japan Maritime Self-Defense Force (JMSDF) for maritime rescue operations.  As the first Mansfield Fellow to be placed with ShinMaywa, this was a unique opportunity for Major Deckard to learn about a seaplane he notes is unique in its ability to land on the open ocean with waves as high as three meters. During his placement Major Deckard visited the plant that makes the US-2 seaplane and houses their overhaul facility.  He learned about US-2 technology and how the seaplane is capable of flying extremely slow speeds and landing on rough seas.  He also had many discussions with ShinMaywa engineers and provided recommendations from a military perspective on future capabilities that could be useful not only to Japan, but also to other countries.

Major Deckard and his ShinMaywa colleagues also visited Iwakuni Marine Corps Air Station, the base for the US-2 used by the JMSDF.  He received a tour of the JMSDF aircraft and the contract maintenance facility, as well as their simulator.  Major Deckard and his ShinMaywa colleagues met the unit that flies the US-2 and their Fleet Air Wing commander.  They are shown above with members of the JMSDF contract maintenance unit in the Iwakuni maintenance facility.  During this placement Major Deckard also visited two other aircraft plants that create parts for aircraft including the wing-spar of the Boeing 787.