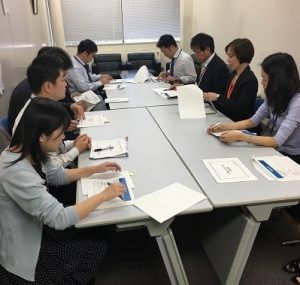 The Mansfield Fellows in Japan are three months into their Tokyo placements, and many have gained an inside view of the Japanese government’s preparations for major meetings and responses to critical developments. Mansfield Fellow Patricia Sloss (Department of Defense) recently concluded a three-month placement at the Ministry of Foreign Affairs’ (MOFA) North America Affairs Bureau.  She began the placement just as that office was preparing for Prime Minister Abe and Foreign Minister Kono to attend the United Nations Security Council meeting, and she later helped the office prepare for President Trump’s November visit to Japan.  She concluded her placement by presenting her colleagues with a briefing (pictured above) in which she suggested ways MOFA can improve publicity for the international exchanges it hosts.

During his recent placement with the Compensation Division of the Bureau of Local Cooperation at the Ministry of Defense, Mansfield Fellow Luke Deckard (United States Air Force) observed firsthand how an aircraft mishap impacted the U.S.-Japan political relationship, the Ministry of Defense, the media, and public opinion.  Major Deckard joined the division shortly after a U.S. Marine CH-53 helicopter was forced to make an emergency landing in a field in Okinawa due to an inflight fire.  He was able to observe several steps in the decision-making process involved in MOD’s response to the incident, which included a conference between the Compensation Division (which serves as a mechanism for coordination between the U.S. military and MOD), U.S. Forces Japan, and the CH-53 unit in Okinawa.  He also participated in a briefing for Minister of Defense Itsunori Onodera and the press conference at which the government of Japan presented its conclusion that it was safe for the U.S. to continue to fly the CH-53s.