Transition to Tokyo for MFP No. 21 Fellows | Mansfield Fellowship Program 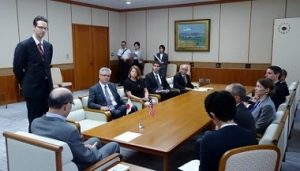 Transition to Tokyo for MFP No. 21 Fellows

This week the twenty-first group of Mansfield Fellows wrapped up the first part of their Fellowship Program — a homestay and intensive Japanese language course in Ishikawa Prefecture — and began the transition to living and working in Tokyo.  Prior to leaving Ishikawa, the Fellows had an opportunity to share impressions from the seven-week program with Prefecture Governor Masanori Tanimoto.   In Tokyo, the Fellows began a series of orientation meetings with Mansfield Foundation staff.  Next week they will meet with representatives of the Japanese government agencies that will host them in their initial placements and attend a U.S. Embassy briefing and a welcome reception hosted by the Ministry of Foreign Affairs.  On September 5 the Fellows will begin ten months of placements primarily in Japanese government offices.