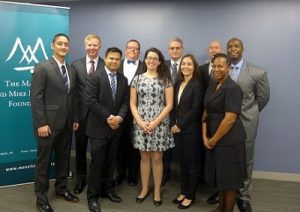 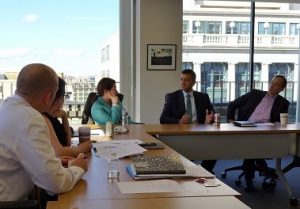 The twenty-second group of Mansfield Fellows met in Washington last week for a series of meetings to prepare for their Fellowship year in Japan.  Early in the week, the Fellows discussed their individual placement plans with representatives of Japan’s National Personnel Authority (NPA), which plays an important role in securing the Fellows’ government placements during their ten months in Tokyo.  On March 1, alumni Fellows and friends of the Foundation joined the ten new Fellows for a reception in their honor hosted by the Embassy of Japan and held at the Mansfield Foundation.  The new Fellows’ orientation concluded with a full day of meetings to help them prepare for their arrival in Japan this summer.  Satohiro Akimoto (Washington Insights) provided the Fellows with his perspective on the recent Trump-Abe meeting and U.S.-Japan relations going forward.  The Fellows also heard insights on the Fellowship Program from three alumni Fellows – Mahmoud Jardaneh (Nuclear Regulatory Commission), Jennifer Wheelock (U.S. Congress), and Paul Saulski (U.S. Securities and Exchange Commission).