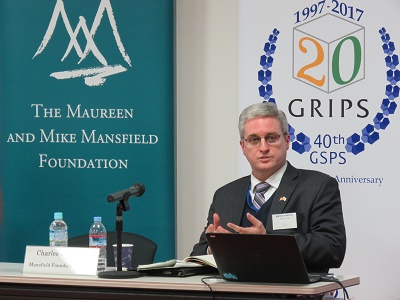 U.S.-Japan Nuclear Cooperation.  In a February 15 presentation organized by the Mansfield Foundation and the National Graduate Institute for Policy Studies (GRIPS), Mansfield Fellow Charles Mahaffey (U.S. Department of State) talked about “U.S.-Japan Nuclear Cooperation: From Power Generation to Extended Deterrence”  Mr. Mahaffey, offering personal views based on his time within Japanese ministries, described the close cooperation between the United States and Japan on nuclear issues, including on power generation, addressing proliferation challenges, and seeking effective measures on disarmament. He explained the unique role Japan plays, and can play, on each of these three pillars. He shared observations on lessons learned from the history of nuclear arms control and offered perspective on the prospects for further action in the future.  Mr. Mahaffey and moderator Hisanori Nei (Professor, GRIPS) also answered questions from the audience, which included representatives of several Japanese government offices, think tanks, and academic institutions, as well as alumni Mansfield Fellow Cameron Salony, who currently is serving as Deputy Director of the Department of Energy’s Japan Office at the U.S. Embassy in Tokyo.  Mr. Mahaffey is in the final week of his placement with the Atomic Energy Division of the Ministry of Education, Culture, Sports, Science and Technology’s Research and Development Bureau. 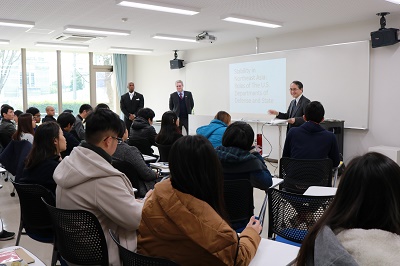 Last week Mansfield Fellows presented the first lectures in the Kumamoto University/Mansfield Foundation Lecture series, an initiative intended to embody the spirit of Maureen and Mike Mansfield by forging personal connections to strengthen the U.S.-Asia relationship.  The first lectures showcased two members of the twenty-second class of Mansfield Fellows – Charles Mahaffey (U.S. Department of State) and Ian Hurdle (United States Air Force).  As both are working to strengthen U.S.-Japan cooperation, they were able to draw from personal experiences to explain how the United States uses diplomatic and military resources to maintain peace and stability, particularly in Northeast Asia. These different but reinforcing perspectives provided for a lively discussion with the students.  Approximately thirty Japanese and international students attended the lectures.  This series was launched with the assistance of Mansfield Senior Fellow Takanori Sonoda, a member of the university’s Global Advisory Board. ​