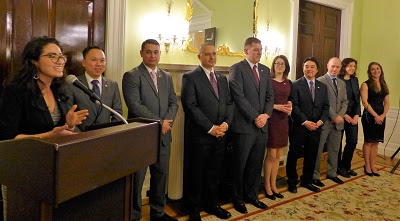 The new Mansfield Fellows gathered in Washington last week for an orientation program that began with meetings with representatives of Japan’s National Personnel Authority (NPA).  The NPA plays a critical role in securing the Fellows’ government placements during their ten months in Tokyo, and these meetings allowed the Fellows to consult with NPA on their individual placement plans.  On February 28 the new Fellows joined alumni Fellows and friends of the Foundation for an Embassy of Japan reception in their honor (shown above).   The orientation concluded March 1 with a full day of meetings to prepare the new Fellows for their arrival in Japan this summer, including an opportunity to gain insights on the Fellowship experience from alumni Fellows Lauren Damme (U.S. Department of Labor); Riley Downing (Federal Aviation Administration), and Mahmoud Jardaneh (Nuclear Regulatory Commission).  Please click here to read a press release about the new Mansfield Fellows.