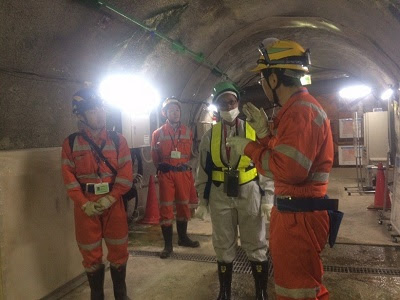 Two members of the twenty-second group of Mansfield Fellows gained insights into how Japan prepares for and responds to disasters through their recent placements.  As part of her placement with the Japan Atomic Energy Agency (JAEA), earlier this year Carmen Dykes (U.S. Nuclear Regulatory Commission) traveled to Ibaraki Prefecture to tour the Nuclear Emergency Assistance and Training Center (NEAT), one of two sites that support nuclear emergency preparedness and response activities throughout Japan.  In addition to touring the facility, she was briefed on NEAT’s role in emergency situations and how the center responded to and learned from the Fukushima Daiichi nuclear accident in 2011. She also visited JAEA’s Tono Geoscience Center (TGC), which does research related to geological disposal of high-level radioactive waste.  TGC is conducting research into deep underground environments, and Ms. Dykes was able to visit one of the major components of this program, the Mizunami Underground Research Laboratory Project (pictured above).

Stephen Ching (U.S. Department of State) began the year at the Japan National Commission of UNESCO, an organization attached to the Ministry of Education, Culture, Sports, Science and Technology (MEXT).  As part of this placement he coordinated the FY2017 UNESCO Fellowship, which the Japanese government offers to members of other National Commissions from around the world. The theme of the year’s fellowship was Disaster Risk Reduction Education (DRRE), and to learn about DRRE in Japan participants traveled to Sendai, one of the regions hit hardest by the Great East Japan Earthquake.  They also visited schools that are teaching students the importance of DRRE.  Mr. Ching said the government and NGO activities he observed during this placement exemplified how Japan is fostering its reputation as a global leader in the area of disaster management.