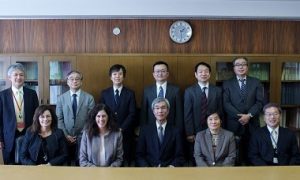 Alumni Mansfield Fellow Yukiko Ellis recently returned from the third in a series of three Tokyo workshops hosted jointly by the Statistics Bureau of Japan (SBJ) and Hosei University/Japan Statistical Research Institute (HU/JSRI).  Ms. Ellis participated in the Mike Mansfield Fellowship Program as a representative of the United States Census Bureau from 2002-2004.  Helping coordinate U.S. Census Bureau participation in the workshops is among the ways she has contributed to the Bureau’s work with Japan since completing her Fellowship.

The first two workshops were held in Tokyo in February 2014 and December 2015 and focused on the U.S. Economic Census and Business Register (BR) (the database of U.S. business establishments).  These workshops provided opportunities for Census Bureau officials to share information and experiences with SBJ and other officials and researchers who work on the Japanese Economic Census.  Participants engaged in substantive discussions comparing the different methods and approaches used for conducting censuses in Japan and the U.S. The most recent workshop was held in Tokyo March 15-17 and focused on three topics: the population census, the American Community Survey, and on race classification in the U.S.  Ms. Ellis (pictured above with SBJ Director-General Masato Aida and colleagues) participated in all three workshops in Japan.  For each workshop she also helped coordinate between the Japanese organizers and Census Bureau officials and followed up with her Japanese colleagues.