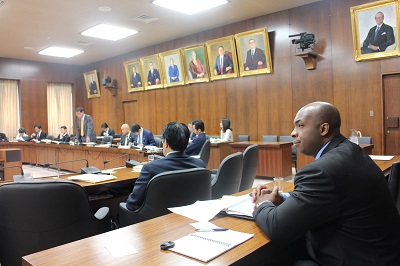 A recent placement in the office of Diet member Yasuhide Nakayama allowed Mansfield Fellow Ian Hurdle (United States Air Force) to sit in on a meeting of the Foreign Affairs Committee (shown above), appear in a live stream interview with Representative Nakayama, and meet with Coca Cola’s Tokyo Olympic committee.  Captain Hurdle is a B-1B Pilot with the United States Air Force.  One of his objectives for his Fellowship year is to further his understanding of how the Japanese government promotes the security of its citizens while interacting with the international community.  His placement with Representative Nakayama, who chairs the House of Representatives’ Foreign Affairs Committee, gave Captain Hurdle an opportunity to work closely with an emerging leader on foreign affairs and security issues.  Representative Nakayama also has actively supported strong U.S.-Japan relations.  He is a member of the Japan-U.S. Parliamentary Association and, in addition to hosting Mansfield Fellows in his Diet office, has met members of the Mansfield Foundation’s U.S.-Japan Space Forum as well as Foley Exchange participants. 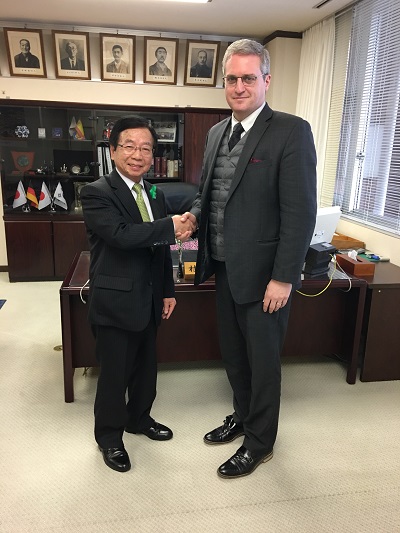 Mansfield Fellow Charles Mahaffey (U.S. Department of State) furthered his understanding of Japan’s position on plutonium reprocessing during a brief placement with Japan Nuclear Fuel Limited (JNFL) earlier this month.  As part of this placement Mr. Mahaffey visited several sites in Aomori Prefecture, including JNFL’s Rokkasho Nuclear Fuel Reprocessing Facility in Rokkasho village.  Mr. Mahaffey said these visits — as well as meetings with JNFL executives, Rokkasho Mayor Mamoru Toda (pictured below), Aomori Prefecture Vice Governor Ikuo Sasaki, and local residents — helped him understand the situation on the ground in Rokkasho and how it relates to overall management of Japan’s plutonium stockpile. Mr. Mahaffey is a Senior Foreign Affairs Officer at the U.S. Department of State’s Bureau of International Security and Nonproliferation.  During his Fellowship year he hopes to explore ways the United States and Japan can further strengthen cooperation in the fields of nuclear nonproliferation, disarmament, and the peaceful use of nuclear technology.  This placement provided an opportunity to explain his work at the State Department and how closely it intersects with the work of JNFL.