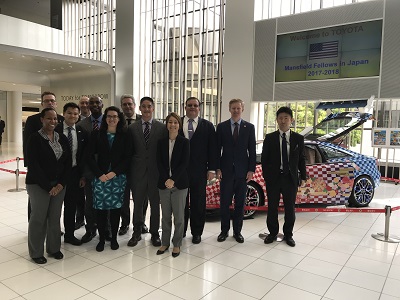 Throughout their year in Japan the Mansfield Fellows participate in study tours and site visits that expand their understanding of Japan’s industry and economy.  After visiting small and medium-sized enterprises in Tokyo earlier this year, this month the Mansfield Fellows traveled to Nagoya and Osaka to tour the facilities of two of Japan’s largest companies – Toyota and Panasonic.  The two-day study tour began April 12 in Nagoya, where the Fellows were briefed on Toyota’s operations before touring the Tokaoka plant, where Toyota has been producing vehicles since 1966.   The Fellows also learned about Toyota’s long manufacturing history and latest technologies at the Toyota Kaikan Museum and Toyota Commemorative Museum of Industry and Technology.

On April 13 the Fellows traveled to Osaka, where Mansfield Foundation Board member Masato Nakamura (Director, International Relations Department, Government and External Relations Division) and other Panasonic executives welcomed them to the newly-opened Panasonic Museum (pictured below) and provided an overview of the company’s operations.   The Fellows learned about Panasonic founder Konosuke Matsushita’s business philosophy and Panasonic’s technological developments over the years while touring the museum.  Following a lunch meeting hosted by Panasonic Vice Chairman Masayuki Matsushita at the company’s headquarters, the Fellows viewed Panasonic’s IoT (Internet of Things) and AI (artificial intelligence) products at the AIS Future Lab at Panasonic’s Automotive & Industrial Systems Company. 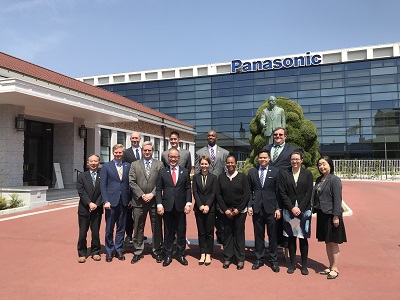