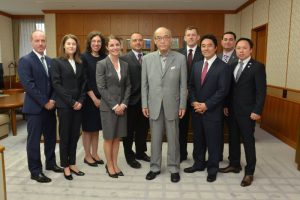 Members of the 23rd class of Mansfield Fellows are now at the halfway point of their seven-week Japanese language immersion in Ishikawa prefecture. The time spent in Ishikawa affords Fellows not only with the opportunity for intensive language study, but also to engage with their host families, cultural experiences, and local leaders. Ishikawa Prefecture Governor Masanori Tanimoto has welcomed each new class of Mansfield Fellows after they arrive in the prefecture, in a tradition spanning more than fifteen years. On July 10, Governor Tanimoto welcomed the twenty-third group of Mansfield Fellows to his office, where he learned about the Fellows’ objectives for their year in Japan and offered an overview of Ishikawa’s culture, traditions, and other special features of the region. Following the conclusion of the seven-week language immersion program, Fellows will return to Tokyo to begin their 10 months of placements.