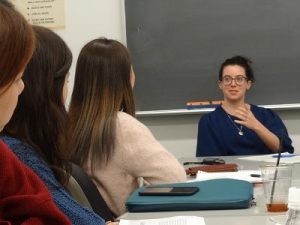 Last week two Mansfield Fellows served as guest lecturers at Professor Mieko Nakabayashi’s classes at Waseda University in Tokyo.  Professor Nakabayashi previously served as a Member of Japan’s House of Representatives and regularly briefs Mansfield Fellows on Japan’s political system and legislative process.  Her class on Postwar Japan-U.S. Relations heard from Charles Mahaffey (Senior Foreign Affairs Officer, U.S. Department of State), who spoke to the group about ways the United States and Japan work collaboratively on nuclear issues, from preventing the spread of nuclear weapons and addressing nuclear threats such as those posed by North Korea to ensuring the safe and secure use of nuclear technology for peaceful purposes.  The discussion focused on past and present efforts to reduce nuclear threats, and the role of nuclear weapons in current security policies. Drawing on the experience of U.S.-Russian nuclear arms control, the group discussed the importance of — and many complexities involved in — the development of effective measures to advance nuclear disarmament in the future.  Sarah Watson (Environmental Engineer, U.S. Environmental Protection Agency) provided Professor Nakabayashi’s class on Japan in the Age of Globalization with a presentation on global environmental issues.  Ms. Watson focused on U.S. and Japanese leadership in managing these issues, particularly with respect to transboundary movements of pollution and waste and in the context of international environmental treaties and the work of the United Nations Environment Program. This small discussion-based class included students from countries including Japan, China, Vietnam, Taiwan, Korea, and Australia, all with unique perspectives on global environmental issues and development, especially in rapidly industrializing countries. 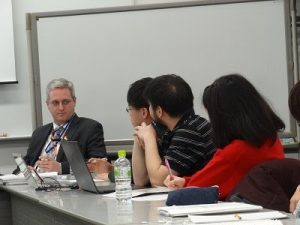