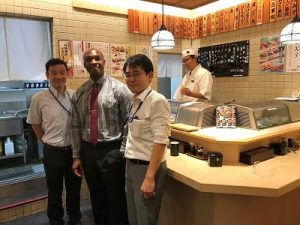 Earlier this month the twenty-second group of Mansfield Fellows began their placements in Japan.  Each Fellow will participate in ten months of placements, primarily in Japanese government offices.  Ian Hurdle’s (United States Air Force) initial placement is with the Ministry of Foreign Affairs’ Southeast and Southwest Asian Affairs Department, where his first week included presenting a report on U.S.-Philippine relations and creating a presentation comparing Chinese and Japanese investments in South East Asia.  Captain Hurdle also joined his MOFA colleagues for lunch (shown above) and for an event commemorating Singapore’s 52nd National Day.  Rodger Welding’s (United States Air Force) initial placement was with the Minister’s Secretariat in the Ministry of Defense (MOD), where he benefited from extensive briefings on MOD’s mission, key concerns, and pressing issues within Japan and the region.  This prepared him for upcoming placements in MOD divisions including the Japan-U.S. Defense Cooperation Division, the International Policy Division, Joint Staff, and Air Staff.  Major Welding is shown below in front of Ichigaya Memorial Hall at MOD.

In addition to their professional placements, the Mansfield Fellows continue to deepen their understanding of Japan’s society and culture.  In early September Captain Hurdle, Major Welding, and Stephen Ching (U.S. Department of State) participated in a festival in Asagaya at the invitation of their Tokyo Japanese teachers.  The photo below shows them helping to carry an omikoshi, a portable Shinto shrine, during the festival. 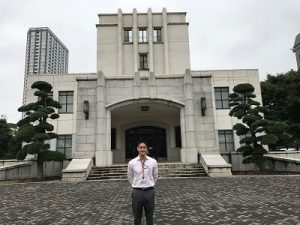 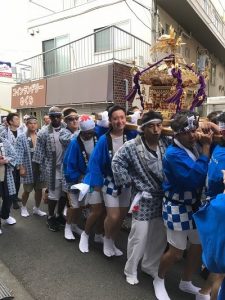