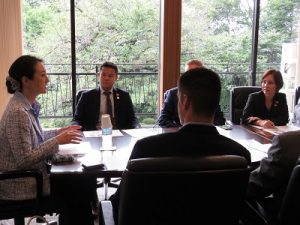 On October 3, Mieko Nakabayashi briefed the Mansfield Fellows in Japan on the history of — and current issues in — Japanese politics. Dr. Nakabayashi served as a member of Japan’s House of Representatives from 2009 to 2012 and is currently teaching social sciences at Waseda University.  Her presentation began with an introduction to the major political parties of Japan. Dr. Nakabayashi pointed out that Japanese politics can be complex due to the ideological differences between members of the same political party, which often result in the formation of factions within the party and defections to other parties. She emphasized that politicians are more than often just trying to survive and therefore find it favorable to affiliate with certain political parties, regardless of their ideologies.  Given the events leading up to this month’s general election, many of the Fellows had questions for Dr. Nakabayshi about the formation of the Party of Hope.  Dr. Nakabayashi also described the Japanese legislative process.  She explained that Japanese lawmakers cannot submit bills as easily as American lawmakers and that the great majority of bills enacted in Japan come from the Cabinet.  She briefly addressed topics in the spotlight for the upcoming general election, including women in the workforce, the declining birthrate, an aging population, and the consumption tax raise.