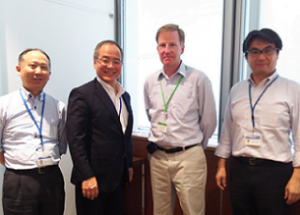 Alumni Fellow Siri Hakala (National Oceanic and Atmospheric Administration, NOAA) was an invited keynote speaker at the 85th International Symposium of the Japanese Society of Fisheries Science (JSFS) “Fisheries Science for Future Generations” September 22-24. She gave a talk titled “Towards Increased Understanding: Contrasting the U.S. and Japan’s Federal Fisheries Science and Management,” where she presented some of the lessons she learned as a Mansfield Fellow about the similarities and differences between the two countries’ approaches to fisheries science and management.  The symposium was held in Tokyo, Japan on the campus of the Tokyo University of Marine Science and Technology. Ms. Hakala has also been named the U.S. Coordinator for a bilateral agreement between NOAA Fisheries and the Japan Fisheries Research and Education Agency (FRA). While in Japan for the JSFS Symposium she also participated in meetings with FRA staff to further plans for research collaborations between the two agencies. Ms. Hakala participated in the Mike Mansfield Fellowship Program from 2016-2017.

Alumni Mansfield Fellow Michael Bosack wrote about the impact of Japan’s Peace and Security legislation in “Japan’s Security Legislation Turns Two,” published in Tokyo Review  September 29.  He also examined the consequences of Tokyo Governor Yoriko Koike’s early launch of the new political party, the Party of Hope, in “Is Koike’s ‘Hope’ Already Fading?” published in the Tokyo Review October 5.  Mr. Bosack participated in the Mike Mansfield Fellowship Program as a representative of the U.S. Air Force from 2013-2014 before serving as Deputy Chief, Government Relations Branch, Headquarters, U.S. Forces Japan.  He currently is a PhD candidate at the International University of Japan’s Graduate School of International Relations.