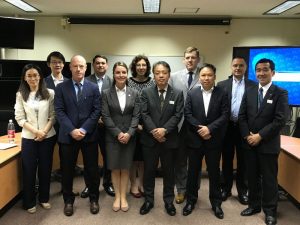 Mansfield Fellows and staff with JR Central officers in Tokyo

The tour offered a comprehensive overview of the latest systems in place to safely and accurately control the operation of the Tokaido and Sanyo Shinkansen. Fellows received an overview of JR Central’s history and activities, and learned about the specific duties involved for the seven control groups stationed in the Center. The tour also included a viewing of the intricate train schedule plans that must be created and adjusted each day according to a multitude of factors, such as weather and demand fluctuations. The group discussed career trajectories for control officers, the various criteria involved in train operation decision making, and ways to promote and increase understanding of High-Speed Rail technology in the United States. 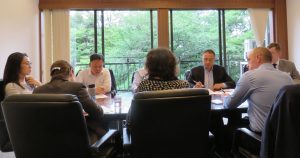 MFP 23 Fellows meet at the International House of Japan

Also on May 14, the current class of Mansfield Fellows met at the International House of Japan in advance of their final month of placements in Tokyo. The Fellows will conclude their ten months of placements in Japanese agencies in mid-June and return to the United States that month.

Fellows discussed their experiences over the last year, and learned about how to prepare to leave Japan and return home.