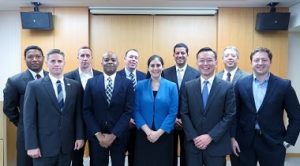 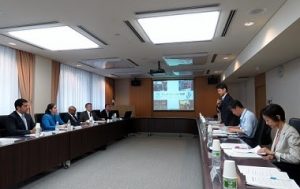 Last week members of the twentieth group of Mansfield Fellows (pictured above) concluded their Fellowship year in Japan.  One of their final program activities was a June 27 debriefing and farewell event at the National Personnel Authority (NPA), which plays a critical role in securing Mansfield Fellows’ placements in Japanese government agencies and ministries.  The Fellows prepare reports on what they gained from their Fellowship experience, and last week they presented their reports in Japanese to NPA Director General Kenji Ebata (pictured below) and other NPA officials.

Soon after the twentieth group of Fellows wrapped up their Fellowship year, the twenty-first group arrived in Japan to begin theirs. The new Fellows are participating in orientation meetings at the Foundation’s Tokyo office this week and on July 9 will head to Kanazawa for a seven-week course of Japanese language study.