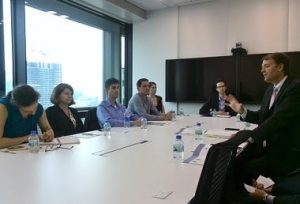 MFP No. 21 Meets with Alumni Fellows

Prior to beginning their placements in Japanese government offices September 5, the Mansfield Fellows in Japan had an opportunity to meet with two alumni Fellows.  On September 2 they met with Deputy Assistant USTR for Japan David Boling (pictured above), who participated in the Fellowship Program as a representative of the U.S. Department of Justice from 1999-2001 and managed the program as vice president of the Mansfield Foundation from 2011-2015.  During the September 2 meeting, he shared observations based on his experience as a Mansfield Fellow and Fellowship Program director.  Sojitz Corporation graciously provided space for the meeting at their head office in Kasumigaseki.

The Fellows also met with Matthew Poggi, who participated in the Fellowship Program as a representative of the U.S. Department of the Treasury from 2009-2011 and currently serves as Financial Attaché at the U.S. Embassy in Tokyo.  This meeting was one of several orientation meetings organized for the Fellows by the National Personnel Authority (NPA).  The final orientation sessions also included a courtesy visit with House of Councillors Member Yoshimasa Hayashi, a luncheon hosted by NPA Commissioner Kozo Yoshida, and briefings by NPA and other Japanese government officials.