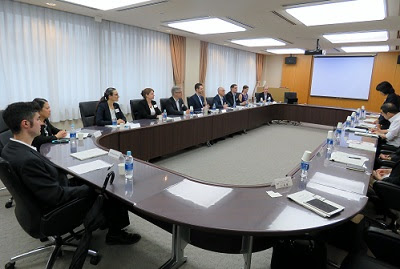 Last week the twenty-first group of Mansfield Fellows wrapped up their Fellowship year in Japan. Among their final meetings was a June 26 debriefing with the National Personnel Authority (NPA), which is instrumental in securing the Fellows’ placements in Japanese government agencies and ministries during the year. Speaking in Japanese, each Fellow presented a report on their Fellowship experience and answered questions from NPA Director General Emiko Matsuo and other NPA officials. The debriefing was followed by a farewell reception hosted by the NPA for the Fellows, their families, and their colleagues from agencies that hosted them during the year.

All Mansfield Fellows are required to return to federal service for at least two years after their Fellowship year. Most members of the twenty-first class will return to their home agencies in the United States, but Meyliana Tongko (United States Air Force) has been assigned to a U.S. government position in Japan. Captain Tongko will help promote the U.S.-Japan bilateral relationship as a Regional Affairs Strategist with U.S. Forces, Japan.