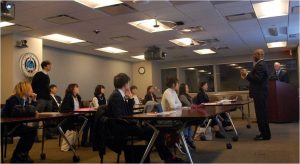 This past month, alumni Mansfield Fellow Howard Stone (U.S. Justice Department) and INTERPOL Washington, the U.S. National Central Bureau staff hosted a visiting delegation from Sophia University.   The students were selected from among various faculties, and were in the capital area to gain a broad view of the U.S. government, examine international relations utilizing a D.C. perspective, and hear about the Japanese government’s work in Washington.  They started with a briefing on cybersecurity challenges, terrorism prevention, financial fraud, the implication of crypto-currencies, the security complexities presented by social media, and INTERPOL Washington’s utilization of international networks to combat and defeat transnational threats. They learned that each of the more than 190 member countries of the organization operates a National Central Bureau (NCB), that police are able to communicate with one another as fellow professionals regardless of the politics between their respective nations, and that there are four primary languages utilized by INTERPOL in the event of an international convening.  Washington D.C. NCB Senior Advisor Emmett Sigmon presented to the students and gave them the opportunity to ask questions while NCB Chief of Staff Bernard Graham made a surprise visit.  (The photo above, provided by INTERPOL Washington, the U.S. National Central Bureau, shows Mr. Graham speaking to the students, with Mr. Sigmon to the right and Mr. Stone to the left.)  The itinerary wrapped up with a tour of INTERPOL Washington’s 24-hour command center.  Mr. Stone participated in the Mike Mansfield Fellowship Program from 2014-2015; Sophia University was among his placements during his year in Japan.