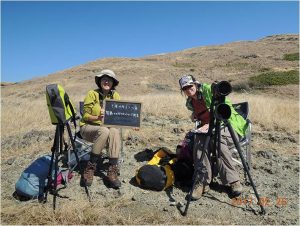 Earlier this year Mansfield Fellow Siri Hakala, a biologist with the National Oceanic and Atmospheric Administration (NOAA), participated in field observations underway on Mukojima, a protected island in the Ogasawara Islands archipelago southeast of Tokyo. As part of her placement with the Yamashina Institute for Ornithology, Ms. Hakala spent five days alongside Japanese researchers observing short-tailed albatross, a critically endangered species. Starting in 2008, a small population was translocated to the Ogasawara Islands in an effort to expand their current nesting territory. The species was near extinction in the 1930s, and is still recovering. Ms. Hakala shared information about NOAA’s protected specifies work in two talks: one for Yamashina Institute staff and albatross researchers, and a second for the research and naturalist community on Chichijima. Those lectures and her time on Mukojima are described in the Yamashina Institute’s blog. Ms. Hakala described her week on Mukojima in more detail in a May 5 blogpost. Ms. Hakala’s recent placements have included the office of House of Representatives member Hitoshi Kikawada and the Kanagawa Prefecture Fisheries Technology Center. She is currently working with the Tokyo University of Marine Science and Technology.