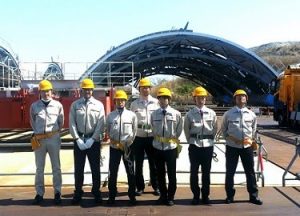 Last week, MFP No. 20 Fellow Mahmoud Jardaneh (U.S. Nuclear Regulatory Commission) participated in a site visit to Ohma Nuclear Power Plant in Aomori Prefecture as part of his placement at Toshiba Corporation. Ohma is one of two nuclear power plants that were under construction at the time of the Fukushima Daiichi nuclear accident.  Major activities at the site have been suspended until the utility company receives approval from the nuclear regulator to continue construction in compliance with the post-Fukushima requirements. During this visit, Mr. Jardaneh participated in a tour of the facility and received a briefing on the current situation at the power plant.  During his placement at Toshiba, Mr. Jardaneh also participated in site visits to both Fukushima Daiichi and Daini nuclear power plants to learn about Toshiba’s activities on sites.  The photo above shows him with Toshiba staff at the Onahama fuel removal mock facility in Fukushima Prefecture, where a large dome is being manufactured for placement atop Fukushima Daiichi Unit 3.

Mr. Jardaneh’s placement at Toshiba Corporation focused on understanding the role the company plays in nuclear power plant design, component manufacturing, construction, and decommissioning. To get a comprehensive understanding of this role, he had the opportunity to visit several of Toshiba’s research and manufacturing facilities.  He also observed live demonstrations of various robots developed for use at the Fukushima Daiichi accident site, viewed the remotely operated Fuel Removal System that will be used for removing debris and fuel from the spent fuel pool of Fukushima Daiichi Nuclear Power Station Unit 3, and participated in briefings on several cutting edge research activities and technologies that will be used to advance nuclear energy, nuclear safety, and other related technologies.  Later this month Mr. Jardaneh will begin a placement with the Nuclear Risk Research Center.