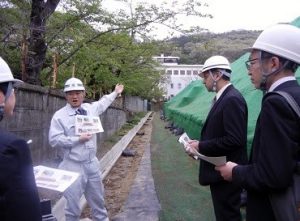 Late last month MFP No. 20 Fellow Mahmoud Jardaneh (U.S. Nuclear Regulatory Commission) completed a placement with the Fukushima Prefecture government, where he learned about the government’s efforts to return life to normalcy following the 2011 nuclear accident.  During this placement, he visited the still-evacuated Okuma town and the off-site emergency response center, which was the command center for directing the response to the Fukushima accident until the town was evacuated.  Mr. Jardaeh witnessed conditions in Okuma, saw the damage caused by the earthquake, and learned about efforts to manage wildlife in the evacuated town. He also visited the temporary housing areas where evacuated residents continue to live until permanent housing options are available.

Also during this placement, Mr. Jardaneh visited the newly constructed off-site emergency response centers for Fukushima Daiichi and Daini nuclear power plants, the Naraha Remote Technology Development Center, and the Fukushima Environmental Creation Center. He also received briefings about the management of radioactive waste, learned about cleanup activities in the towns contaminated by radiation, and visited the Fukushima Daiichi nuclear power plant site, where he checked the in-ground ice-wall constructed to minimize flow of contaminated water into the ocean. The photo above shows Mr. Jardaneh with accompanying Fukushima Prefecture staff at a temporary contaminated soil storage site. Later this month, Mr. Jardaneh will begin a placement in the office of Mr. Kaneshige Wakamatsu, State Minister for Reconstruction and member of the House of Councillors.