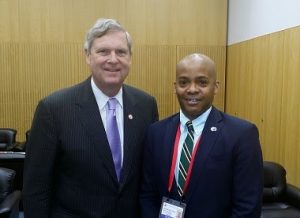 MFP No. 20 Fellow Darrell Rico Doss’s placement in Japan’s Ministry of Agriculture, Forestry and Fisheries (MAFF) coincided with the April 23-24 G-7 Niigata Agriculture Ministers’ Meeting, giving him a unique opportunity to participate in one of the nine minister-level meetings leading up to the G-7 Summit in Ise-Shima, Japan later this month.

Mr. Doss said the timing of his MAFF placement was propitious in that he was able to work not only in the International Affairs Division of MAFF, but also with the G-7 substance and logistical point-teams.  He noted the ministerial meeting focused on such issues as: the increasing average age of farmers, addressing the demand for safe food, and working to manage the pressure put on farming and natural resources due to climate change.  He also observed that the Trans-Pacific Partnership loomed in the background of the meeting and that this — as well as the stagnant Japanese economy, the U.S. presidential election, and the “Brexit” debate — will figure into the deliberations at the summit in Ise-Shima.

Mr. Doss, who served as Economic Policy Counsel in the office of Congresswoman Sheila Jackson Lee prior to beginning the Fellowship Program last year, was able to work side-by-side with his Japanese colleagues throughout the ministerial meeting.  He also had the opportunity to meet U.S Secretary of Agriculture Tom Vilsack (pictured with Mr. Doss above) at the meeting.  Mr. Doss concluded that working with the Japanese delegation will better inform his work in the U.S. Congress, where having an insider’s view of the preeminent global gathering will prove indispensable.

A second MFP No. 20 Fellow, Patrick Rory Tibbals (U.S. Air Force) had a role in another ministerial meeting preceding the G-7 Summit, the ICT (Information and Communications Technologies) Ministers’ Meeting.   As part of his placement in the office of Takuya Hirai, a member of Japan’s House of Representatives, Major Tibbals provided consultation as Representative Hirai prepared remarks for the meeting, which took place in his district in Takamatsu, Kagawa April 29-30.